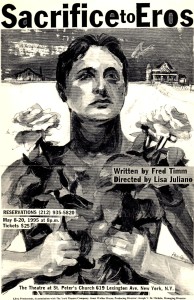 Background:  Set during the Great Depression, Sacrifice to Eros (first-place winner of the 1989 Wallace Hamilton Contest, sponsored by the Dramatists Guild) tells the story of a runaway son who returns to his family’s failing, midwestern farm to make peace with his dying father.  During his visit home, his family learns the cause of his estrangement—his homosexuality and his involvement with a family friend.

Production history:  Sacrifice to Eros has been produced twice Off-Broadway and once Off-Off-Broadway and has had multiple readings at various New York City venues.  Some of the actors who have participated in performances or readings include Cornelia Sharpe (from Serpico), Earle Hyman (from The Cosby Show), and Novella Nelson.  Note:  the image at left (created by artist Lynn Pauley) from 1995 Off-Broadway production.

Note:  If you wish to produce Sacrifice to Eros (which you are welcome to do at no extra charge), please send me an email at ftimm@verizon.net to let me know.