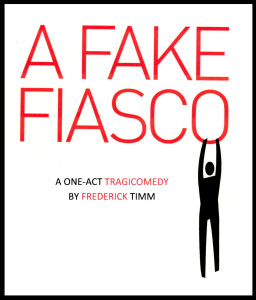 A one-act tragicomedy by Frederick Timm © 2006

An introduction:  A husband, contemplating suicide while hanging off the Brooklyn Bridge, discovers he’s real.  He’s also late for his fake wife’s dinner party.  Returning home, he tells her he wants to leave her—and she is irate.  Guests are coming and he’s been on the six o’clock news embarrassing her!  Ding-dong, the guests arrive, a gay couple, and so does the fun and the question—who wants to stay fake and who wants to get real?  Dinner is served and so is the choice.  Bon appétit!

Production history:  A Fake Fiasco has been produced twice, both Off-Broadway and Off-Off-Broadway, and read in several New York City venues.

Note:  If you wish to produce A Fake Fiasco (which you are welcome to do at no extra charge) please send me an email at ftimm@verizon.net to let me know.