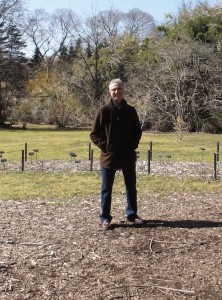 I am a psychotherapist, playwright, and visionary living in New York City.  I am single and I am singular of purpose.  My goal is to heal my traumatic history and evolve into fully conscious living—enlightenment.

In my youth, I toured the world as a modern dancer with The Nikolais Dance Theatre.  Yet for all the worldly attention that career provided, I felt empty inside.  I questioned my value as a person apart from my professional role.  I left theater to find myself.

I became a caretaker for a church.  Though the archetypes of that religion were profound, their application was limited.  But it was during those years of quiet, lowly work that I was able to self-reflect and find a deeper sense of myself.  While tending a sanctuary, I explored my inner sanctuary and discovered what was true and sacred—within.  I also found I was wounded.

I discovered that I had been emotionally crippled by my upbringing and culture.  I also began to observe that this was the norm.  My goal was to untie the knots of parental and societal harm in order to liberate the truth of myself.  Now as a therapist, I strive to help others do the same.

As a playwright, I have been produced eleven times in New York City.  All of my plays have a common theme—that unhealed parents hurt their children.  My first production, a retelling of Euripides’ Iphigenia, explored the murder of a daughter by her father.  In my most recent play, Fugue for Four Voices, which I wrote in 2011, a mother and father infect their children with ancestral trauma.  In Iphigenia, the daughter dies.  In Fugue for Four Voices, the son and daughter fight back and redefine themselves and their perspective on their parents.

As a visionary, I don’t have mystical, prophetic powers.  I just see that the old way of being human is not sustainable and a new way is.  The old way, one that denies our inner world which holds both our traumatic legacy and our denied creativity, is killing us.  In turn, we destroy the world around us, including our children.  The new way of being human—aligned with truth, not trauma—will save us and the planet.  We must grow beyond our troubled families and into our true and sacred selves to generate a new creation.

My ideas, ideals, and identity have never jibed with my family or the mainstream culture.  In one sense, this was most obvious because I am gay.  But I have come to realize, over the years, that my level of difference goes much deeper than my sexual orientation.  I was different in so many ways, and still am.

Now, with daily reports of global economic and ecological collapse, I see that my life outside of the norm—on a variety of levels—was a healthy response to a troubled system.  For instance, going into self-imposed exile by moving away to New York City saved my life and soul.  I, the outsider, was right.  The norm was and remains disturbed.

I offer these ideas, gathered from my own life journey, to encourage you to align with truth—not trauma.  I challenge you to leave your limiting family and to live true, as life intends.

3 thoughts on “About Me”